The Great Sphinx stands on the plain of Gizeh in Egypt, communicating its message of love, devotion, and overcoming as it has done for the past six thousand years. The message it carries is timeless: It is the Sphinx’s love for God which causes an inner victory over the lower forces of its own nature. This message is captured both in the Sphinx’s construction and its orientation: a noble human head on top of a lion’s body — a composite figure, part human, part animal — that rises out of the earth to face the rising sun each day and to follow its passage across the sky.

To attain the goal which the Sphinx represents is to undertake the journey of purification. This journey requires long, deliberate effort, motivated by the desire to reach the goal. What is this goal? It is the eternal marriage of Life and Light that love seeks and that the Sphinx represents. It is the Covenant, the purpose for Creation – its beginning, and the place of its return.

The Sphinx adores the sun — Ra, the supreme God according to ancient tradition. It waits for it to return each day. It is the Sphinx’s adoration for the sun that causes it to rise out of itself, out of the earth from which it is made, to reach continually for the higher level of its being, called by the light. This adoration causes the life within it to become holy: forever striving, Life meeting Light.

The construction of the Sphinx represents humanity’s future: the triumph made possible by love of the higher self over the lower; of the human, spiritually-driven self over the instinctual, need-based self; and of the Divinely-led and inspired self over the self that is closer to the animal kingdom. This is the reason for the human head on top of the lion’s body: what is most human within us, what is capable of perceiving God and of wanting to be joined with God, ascends out of animality and instinct in order to follow the path of the Sun.

Timeless, yet relevant to today, the Sphinx’s voice speaks to us from the past concerning the joyful reunion that can occur when human will is no longer personal but becomes joined to Divine will. This joining makes possible the transition from the human to the Divine. It makes possible the emergence of a ‘sacred human’ — one who rises out of instinct and personal desire toward the higher ideals of purity, service, and love for God.  The Sphinx stands as a lodestar or magnet for the future of mankind. It prefigures what is later to be called the Biblical ‘Israel’, for ‘Israel’ is the name of what it means to become a ‘sacred human’. ‘Israel’ is also the name for what it means, on the collective level, to become a holy people — a people whose life is dedicated to serving God, and to honoring all life on earth as sacred. 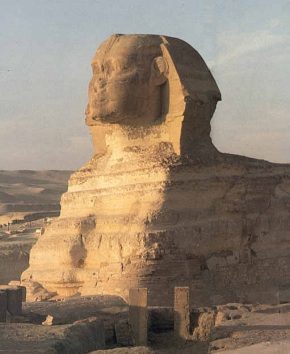 To attain the goal which the Sphinx represents is to undertake the journey of purification. This journey requires long, deliberate effort, motivated by the desire to reach the goal. What is this goal? It is the eternal marriage of Life and Light that love seeks and that the Sphinx represents. It is the Covenant, the purpose for Creation — its beginning, and the place of its return. When the soul reaches a certain stage in its own development, love calls it and inspires it to seek its own higher nature, moved by the stirrings within itself. Then a partnership takes place between human effort and Divine assistance in pursuit of this end. This partnership, this marriage of intention between God’s purposes for humanity and human purpose is the meaning of the Covenant. It is also the motive force and the method for that which leads to it — the process of purification.

Topics: Living as a Soul
Share
Related Teachings
The Dharmic Path and the Karmic Path Believing in the Power of Love The Dreams of Each Human Heart I Claim My Destiny as a Spiritual Being — A Meditation
Sign Up for Our Newsletter
Make a Donation

Help sustain the work of Light Omega so it can offer its resources freely to all.